Exalted Seracthon has been published to Steam.
Release date: Dec 12, 2022. 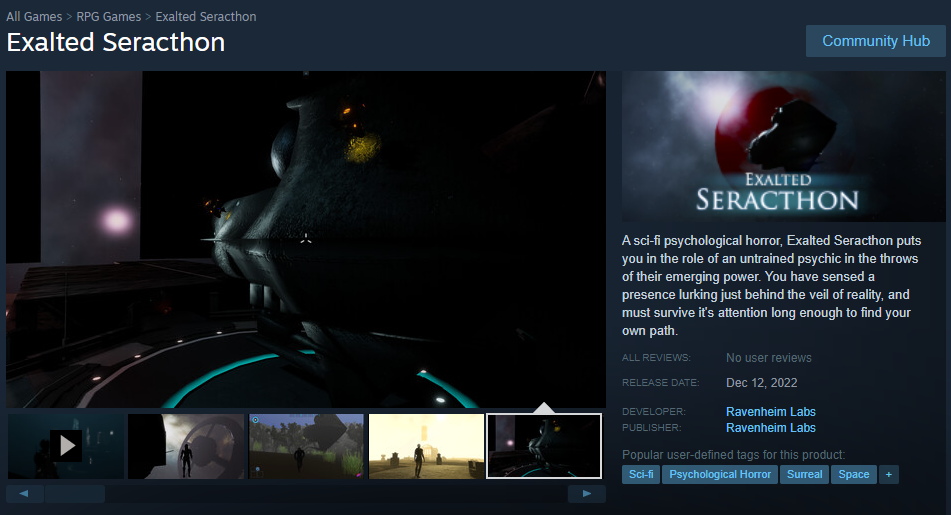 You can check out the game’s page here.

This game was developed on the Unity 3D engine for the PC platform. It is a single player story-driven sci-fi psychological horror. However, it is not purely sci-fi / horror in the way people expect to see these genres, and will take the main character into some strange situations.

You can expect to encounter space, and travel to other worlds. You will be able to customize your own unique character, acquire followers, gather items, and fly your own ship. However the game was designed for a different style of gameplay than is customary – you will not be slaughtering thousands of aliens, or generally killing people and taking their stuff as a primary occupation; your observation skills will actually be more useful than weapons on this kind of journey.

This game in neither a hero’s journey, nor a thieves adventure. It is the mage’s path, and is portrayed in a way that is seldom told, if indeed the mage’s path can be found in a modern story.

You will be using your character’s abilities to learn how the world works, and to understand why things are the way they are. Without knowledge, the strange situations that await would be overwhelming. For more details on gameplay and mechanics, check out the Gameplay page.

We felt that the best way to tell the story of person walking the Path of Knowledge would be a personal one. Consequently, the game was designed as a single player game experience. However – a second chapter (DLC) is underway, and other games of a similar esoteric current are in development.

The game was completed and tested in Fall of 2022. All programming, 2D and 3D art, writing, direction, and effects were created between 2018 and 2022. The soundtrack includes compositions by Iron Cthulhu Apocalypse, CO.AG music, and others.